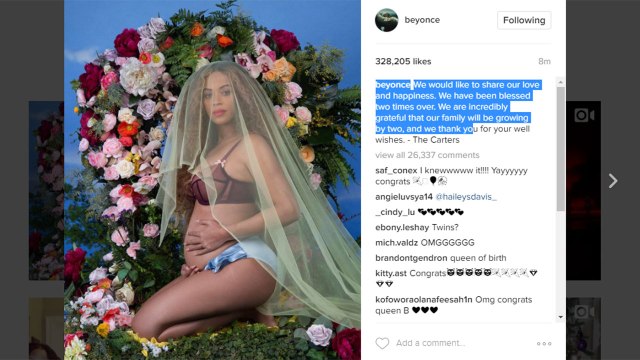 Congratulations to #QueenBey and husband rap mogual Sean “Jay-Z” Carter who announced today that the Grammy winner is not only pregnant, but expecting TWINS! Rumors have swirled for months speculating the singer’s pregnancy status, but in typical fashion, the Love On Top singer remained mum. Speculations continued amid rumors that ‘Yonce and hubby, Jay were on the rocks after the jaw-dropping surprise that was the visual album last year, Lemonade. However, the singer took to her Instagram account today to confirm the news.

While this is not the second pregnancy for the singer, this will be her second birth. Beyonce revealed in her documentary, Life Is But A Dream that she suffered a miscarriage for which the song she penned, Heaven Couldn’t Wait For You.